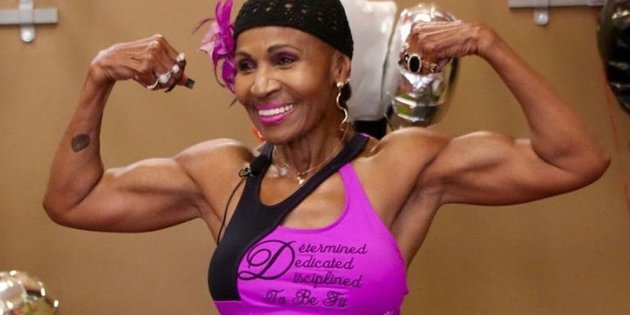 On June 16, Ernestine Shepherd celebrated her 82nd birthday, but it’s hard to believe in looking at her photo. In her age, a woman is able to withstand such an intense load, which is beyond the power of many young and healthy people! Those who still have not prepared the body for the summer (the first month of which is already running out), whose motto is “not today”, who doesn’t have enough time to play sports, to fans of the “night eating” and many others.

Ernestine Shepherd was born on June 16, 1936. In her youth, she showed no interest in the sport, she and her sister Mildred, with whom Ernestine was very close, did not lack the attention of men: both girls were pretty and they had enough fans. When Ernestine was 56 years old and Mildred was 57, they were invited to a pool party. Women went shopping to choose swimsuits and in the fitting room, they noticed that their bodies had changed a lot with age (apparently, up to this point, age changes did not disturb the Shepherd sisters). Ernestine and Mildred decided to act: first enrolled in an aerobics class, and when the load was not enough, they switched to strength training in the gym.

The sisters did very hard. Sport became part of their daily routine, they even took part in bodybuilding competitions, after which Mildred shared her dream with her sister – to see them with Ernestine in the Guinness Book of Records as the first bodybuilding sisters. Alas, the dream was not destined to come true: in 1992, Mildred died from an aneurysm rupture. For the next five years, Ernestine was in a deep depression, as her sister was the closest person to her. At one point, a woman woke up with grief and recalled her sister’s instructions:

Whenever you feel that you can not cope, shoe sneakers, get out of the house and run.

From that moment on, Ernestine’s life changed: at the age of 71, she began to run again, and then returned to intense loads in the gym.

Ernestine’s day begins quite early – at 3 am, prayer and meditation are scheduled. At 4 in the morning, she goes for a 16-kilometer run. If you are preparing for a marathon, the distance increases, but on average, Shepherd runs about 130 kilometers a week. Already at 8 am, the athlete begins to exercise, in addition, she is engaged in personal training with her clients, and she takes lessons from the former “Mr. Universe” Jonny Shamburger (whom Google ironically calls “hamburger”). At 10 pm, Ernestine goes to bed.

Ernestine’s height is 168 centimeters, her weight is 59 kilograms, the percentage of body fat is 9-10 (the norm for women over 50 is 16-25 percent). The bodybuilder consumes 1,700 calories per day: the basis of her diet is boiled proteins, chicken breasts, vegetables, brown rice, and a protein shake.
Ernestine Shepherd has run nine marathons in the last 20 years and won two bodybuilding competitions. In 2010 and 2011, this wonder-woman hit the Guinness Book of Records as the most adult bodybuilder

Ernestine is already 62 years old married to Collin Shepherd. The future husband first saw his beloved in the supermarket, where she worked as a cashier – Ernestine was then only 18 years old.

My mother sent me to the store. There I saw Ernestine. She wore so much jewelry that I thought she was already married,
– recalls Collin

A couple of years later, love and understanding reign. Their son Michael is 53 years old and his grandson is 14 years old. Men complain that obsessive boyfriends are staring at Ernestine, and they have to keep their ears open.

The history of Ernestine Shepherd inspires sports achievements, and you will find even more motivation on her Facebook page – Ernestine Shepherd-World’s Oldest Female Body Builder! You can start small: easy jogging in the morning, exercise at home on videos from YouTube. The main thing – do not overestimate their capabilities, trying to outdo the 80-year-old bodybuilder.